It was a very warm and dry summer in 2015. The garden thrived and our our new hives enjoyed a bumper harvest of pollen and nectar. 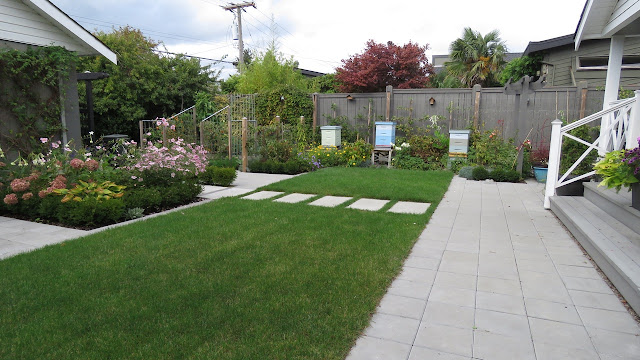 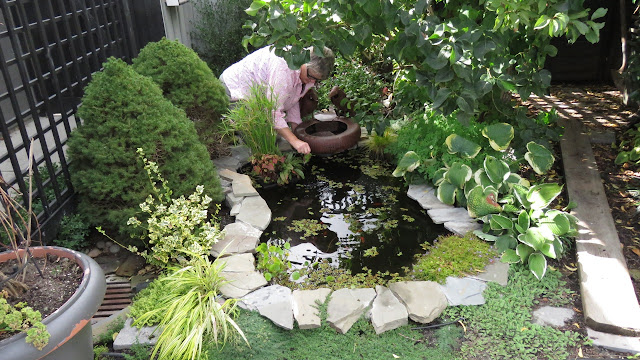 We dug a small pond to create a safe and ready supply of water. To facilitate their landing we planted Salvinia Minima  and Lindernia Grandiflora to provide a platform of small floating foliage and were rewarded with a steady flight pattern of bees landing, drinking and taking off. We wondered where they had been taking their water from previously.

Hive 2: Our old queen soon resumed her steady laying. We have read that each hive has its own character and it has certainly proved true. Hive 2 has always been passive.

Hive 3: This hive was the result of a secondary swarm from Hive 1.  We believe that the virgin queen was not successfully mated so we moved a frame of brood and eggs from H2 to give the bees an opportunity to build new queen cells.  A new queen developed and the demeanour of the hive changed from constant agitation to focused activity so we presumed that the hive was now Queenright.

At the end of July all hives had brood, larva and a good supply of nectar and capped honey in the super. As our nuclear box of bees had swarmed twice we decided we would not remove any honey as each hive needed to increase their numbers of bees and stores for the winter.

We sugared the hives and found very few mites. Sugaring the hive is done by dusting the frames with icing sugar. The bees clean themselves of the sugar and in doing that remove some of the Varoa mites. H1 had 13 mites on the bottom board of the hive after 24 hours and H2 and H3 nothing observed. 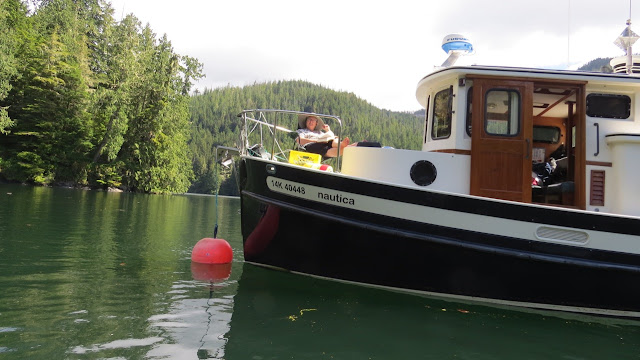 We went away on our boat in B.C. for a month (that's another story). On our return we noted that the the reserves of honey had been almost completely depleated. During a careful inspection we also noted DWV - deformed wing virus in H1 as well as Varoa mites.  We decided we had no choice but to treat the hives chemically for mites

What a disappointment and what a challenge for our bees .... now their stores were low and they were obviously struggling with Varoa. Varoa mites weaken the bees and make them more susceptible to disease.

We began supplying sugar syrup with added essential oils - lemongrass and tea tree, in the hope of providing some chance of their rebuilding their stores of honey.  The Apivar treatment, is a chemically treated plastic strip inserted between the frame. It soon confirmed the heavy infestation with hundreds of mites falling to the bottom board.

It was surprising how quickly the "girls" rebuilt their stores of capped honey. Pollen was still being bought into the hive till the first week of November.  We are now hopeful that they will have enough stores to go through the winter.

Due to the heavy infestation of mites we are considering further treatment by using oxalic acid crystal fogging treatment in January. That will require further study.

The mite count gradually dropped and with the cold weather we removed the liquid feeders and added a small topper super that contains dry sugar blocks for extra feed and a layer of insulation.
We also wrapped the hives with tar paper to help cut the wind which is often strong here on Boundary
Bay. We also tilted the hives forward to allow any condensation to run down and out of the front.

I should mention that we live south of Vancouver BC and the weather is relatively mild compared to much of Canada. We will often have a week of snow and temperatures below zero C. but more likely winter weather is heavily overcast days and non stop rain.

All we can do now is wait and hope that our bees make it through the winter.

Email ThisBlogThis!Share to TwitterShare to FacebookShare to Pinterest
Labels: Varoa in Year One Hives, Year one beekeeper. Beginning with bees

minwks
January 2010 At last, after eight years of sailing our yacht to Australia via North and South America, Galapagos, Marquesas, Societies, Tonga, Fiji, Vanuatu and New Caledonia, we have returned to Canada. We came back and forth regularly during the off cruising seasons but always as a temporary stay. At last, I have unpacked my miniature house, unfinished, I admit but what a treat to put all the treasures into their rooms. Soon I will repack the interiors so that my reliable sidekick husband Bruce and I will be able to complete the exterior.